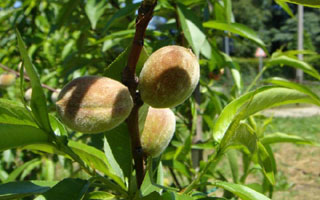 The fruit orchard is dedicated to the “live conservation” of historical fruit trees, not only because they evoke nostalgic memories of the past, but also because of their genetic significance for biodiversity. Although seemingly comparable with modern varieties, these historical exemplars constitute an important gene pool from which to recover positive genetic characteristics that have today disappeared (ex. resistance to pathogens, environmental adaptability, preservation of freshness, retention of maturation after harvest etc).

The varieties of apple, pear and stone fruits in the orchard were commonly found in the markets of Bologna during the last century. Fruit in that era was expensive; it was available only seasonally and offered scents and flavors not always available through today’s large distribution channels. Hence the attempt to recover and reintroduce these varieties, unique and special goods closely linked to the Bolognese territory.


The orchard is divided into two compartments with a total of 150 varieties. The pome fruit compartment contains 42 apple and 33 pear varieties; the stone fruit area features 34 peach (white, yellow and Saturn) and nectarine, 20 cherry, 13 plum and 5 apricot varieties.