The plow, stables and meadow 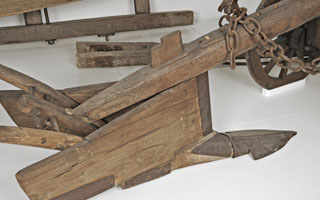 A wooden plow (piò) equipped with a flat moldboard (as dal piò) was used until the second half of the 1800s. With this model however, the farmer was unable to completely loosen the soil clods. Eventually, following various agricultural studies and experiments, it was supplanted by an iron plow equipped instead with a helicoidal moldboard. A carpenter from the nearby township of Budrio, Annibale Gardini, is credited with this invention. Gardini’s plow allowed for complete soil turnover without putting undue strain on the draught animals. Thousands of exemplars, including many imitations, were soon adopted in an area that had always followed the ancient saying of Cato the Elder: “never change your plowshare”. Indeed, in the mid-1900s many farms had yet to adopt mechanized plowing.

In order to assure adequate animal power for plowing and manure for fertilization, tenant farmers usually raised two or three pair of oxen, two pair of steer, two pair of calves and at least one pair of cows, the latter of which were used for breeding and at times for completing certain chores. The growth of crops like grain and hemp caused a chronic shortage of fodder for the animals. Forage was therefore a combination of hay gathered from the meadow, from ditch banks and from the borders of crop access pathways, together with elm leaves and weeds dug up from the fields. The meadow, of modest size and usually located close to the hemp pool, was cut only once a year, in early June. The introduction and alternation of alfalfa (spagna), clover (tarfói) and sainfoin (lupinèla) in the 1800s expanded the base of feed available on the farm, but did not completely substitute the use of traditional forage.