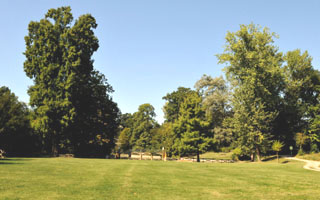 The park grounds cover five hectares of vegetation that stand out from the surrounding farmland. In line with the fashion of the period, the Zucchini Counts wanted an English landscape garden which called for an irregular disposition of trees and bushes, changes in incline, pathways, hedges, false ruins, statues and a lake. The lake, a characteristic element of English gardens, is spanned by a bridge adorned with four well-made statutes. During a recent restoration, it was estimated that these statues were made toward the end of the 17th and beginning of the 18th century.

The small hill-lookout point was probably created from soil dug out of the lake. A path leads up to the summit where there was once a miniature temple containing objects of possible archeological origin but about which we have no further information.

During the creation of the park grounds, a boathouse was built allowing easy access to a rowboat stored inside. A small tunnel carved underneath the hill connects the dock to the lake.

The vegetation in the park today is largely original and includes varieties of local origin as well as from other geographic areas as dictated by the rules of English landscape gardens. Large trees stand out in the park’s center including English oak, elm, white and black birch, holm oak, and laburnum. A majestic example of a bald cypress rises from the shore of the lake.