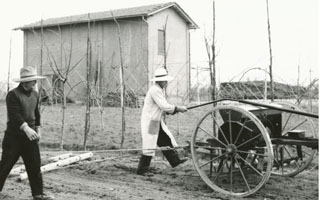 Until the end of the nineteenth century, wheat seed was sown by hand (sumnèr a spài) during the first weeks of October. In areas with good drainage, the seed was covered either by an ox-drawn harrow (arpàigh, arpàid) or by light hoeing, usually the work of a team of women. For soil with poor drainage, a seedbed was created with a symmetric plow (arè), forming raised strips (quadéren) between two furrows. A rake-like tool made of branches was then drug over the surface to cover the seed. Scarecrows (spuràc’), children with noisemakers and detonating devices (scarabatla, stiòp, murtalàtt) were used to defend the seeded fields from chickens (andèr a badèr ai pói) and other birds.

Following initial experiments made in the 16th century, the first mechanical seeding machines began to be used toward the end of the 1800s, thanks to local modifications made to the original English or German designs. To make sure the oxen did not trample the soil, the seeding machine was equipped with a system of cables (cavéster) and pulleys (carócla) so that it could be pulled from a distance along access pathways and away from the cultivated soil.

Toward the end of March, excessive weeds (al furmànt al va in argói) caused concern that the grain would become flattened, and so it was cut back with a scythe (svetèr al furmànt). The wheat tips were used to feed the courtyard animals (hens, geese, pigs) and livestock. The sown fields were tidied several times with a weeding hook (runcàtt, zapàtt), and again by hand prior to harvest. Here again, the weeds were fed to the livestock. After the ears of grain spouted, a taut cord was sometimes passed over them to eliminate dew, considered one of the causes of the rust fungus.