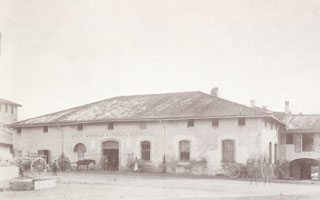 There were about 50 grain mills in the Bolognese plains in the second half of the 1800s. Powered by water from river canals, streams or springs, the mills were equipped with vertical or horizontal wheels and a variable number of millstones (mèsna) – from 3 to 12 – depending on the strength and direction of the water source.

Once or twice a month, famers would bring small quantities of grain to the mills so that it did not go bad (palaur d’la farenna) and to restock their flour supply. Farmers would pay the mill owner a fee (mulidura), either in kind or in cash. The raw, unsifted flour was stored at home in flour chests (cassòn dla farénna), sacks (sach dla farénna), or wooden tubs and sifted as needed to separate the flour (fiòur), coarse bran (ròmmel) and fine bran (tridèl).