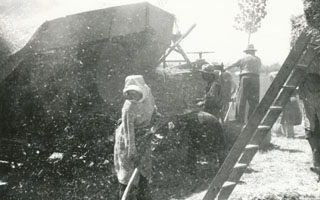 Threshing was the first phase of the harvest to become mechanized. Between the 1800s and 1900s, the development of steam-powered agricultural mechanics made large equipment available to sharecroppers of the Bolognese plains. Inventions such as the firebox (màchina), thresher (trebiadòura), and hay press (prèsa) allowed for the separation, airing and sifting of the grain while simultaneously forming bales of hay.

Large machines could be rented in exchange for 4% of the daily yield. The machines were powered by wood, coal and husk and required 30-40 workers to operate. Rented machines were passed from farm to farm and families exchanged labor. Once threshed, the grain was dried, measured and divided (livèr d èra) between the tenant farmer and landowner. The tenant farmer’s share was then stored in the granary of the farmer’s home. Small aerators and sifters (slucadòura) were used to clean the grain and select the seed for the following year.