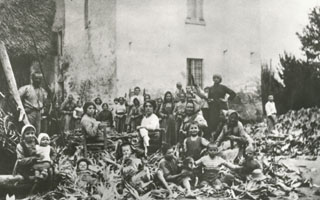 Corn was first cultivated in the Bolognese plains in the 1700s. Seeds were planted in the month of April, first by creating indentations with a specialized rake (rastèl da furmintòn) and then covering over the seed by foot. Alternatively, a hoe was used to create the seed holes where small dose of fertilizer was also added.

Sprouted plants were weeded with a small hoe. In August, when the lower leaves turned yellow, the tops of the stems were cut off (fèr al vatt) and used as forage.

In September, the mature ears of corn were removed by hand and transported by cart to the barn. The outer leaves of the husks (scartùz) were removed in the evenings with the help of neighbors and used to create or refresh stuffing for hay-filled mattresses. The final step was the shucking of corn with a flail (zairc’) made of two sticks bound by a strip of leather. Finally came the uprooting and transport of the stems (malghétt, malghèr) from the fields to the house, where they were used for burning.