The sharecropper household and nuclear families 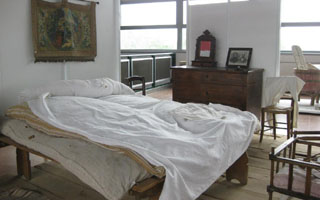 Medium-sized sharecropper households were composed of a dozen people, often up to four men, four women and rarely more than four children, between babies and adolescents. The sharecropper extended household comprised more than one nuclear family, for example a head of household and his married brothers or his married sons. When the size of the household outgrew the cultivatable land, one or more nuclear family units would leave on All Saints Day to set up home, if possible, on another farm. The bedrooms were located on the upper floor of the farmer’s house, together with the granary. The largest room was reserved for the head of house and his wife, l’arżdòur and l’arżdòura, with their smallest children. The other bedrooms were occupied by the sons, married and single, the women and the stable-hand.
Home furnishings were minimal and essential. Every bedroom contained a commode, a bed, a chair, a coat rack and one or more hollow chests for linens. The beds of the children and of the stable-hand were usually formed by a series of wooden planks, held up by two sawhorses. A mattress stuffed with corn leaves (paiòn) was covered with homespun canvas, and with covers made from fabric often sewn in an argyle pattern. The head of house and his wife slept in a similar bed, but made of wrought iron instead of wood, such as those produced by the company Lodini in the nearby township of Giovanni in Persiceto that began to be used toward the end of the 18th century. 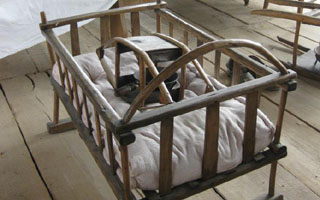 The bedrooms of married couples often had a small bed (litén) for children or bassinet for newborns (còuna). A hollow chest was used both for storage and as a bench, often containing the bride’s hopechest and linens that she had brought to her husband’s family.
The commode (cantaràn/cumò), made of a wooden trestle with large sliding drawers positioned one on top of the other, was used to store linens or clothing. In some homes the commode included a toletta (tulatta), an inclinable mirror framed in chestnut and secured to the back of the chest with two vertical supports. The commode could also be equipped with a small drawer for combs and hairpins.
The bedroom was usually decorated with photographs of the bride’s parents or grandparents. It was also the location used to store the grapes that had been set aside for her family until Christmas, either under the bed or in the closets.
The bedroom was not heated, so the sheets had to be warmed before bedtime in winter. This was done with a circular-shaped copper container equipped with a long wooden handle. It was filled with embers and then repeatedly passed over the surface of the sheets. In cases of severe cold, a brazier (sóra) was inserted in a wooden trestle (prit) that was used to keep the sheets raised to avoid contact with the embers inside.