From cows to the dairy industry 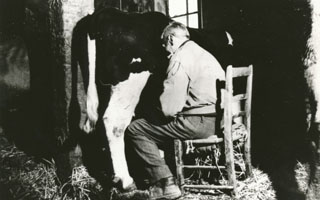 Cattle were raised primarily as draught animals and for beef until the early decades of the 1900s. They were mated in May or June so as to spend the final winter months resting before giving birth in the spring. Veal calves (vidèl) were separated from their mothers (vaca) a few days after birth, but were brought back to her two or three times a day for nursing. Upon reaching a weight of 75 kg, they could be sold to the butcher. However, most were kept to work as oxen or stable cows, or to be sold at about two years of age. Those raised as draught animals were weaned between two and four months of age, at which point many farmers stopped milking their cows since they were used predominantly for labor. Some farmers in areas relatively close to the city also used their cattle for milk. The animals were milked in the evenings; milk was collected in terracotta containers and heated over a slow flame. The resulting cream was used to make butter (butìr), and the milk was taken to the city in straw-covered glass flasks to be sold door-to-door, at the produce market or by specialized sellers.


Widespread raising of dairy cows came about after changes in rural and urban diets and the substitution of draught animals with tractors. In 1915, the province of Bologna counted just 30 tractors. By 1949 this figure had grown to 1700 and by the 1970s close to 20,000. At the same time, the number of oxen had decreased to zero, while the number of cattle - now of a new breed - grew such that 20-30 dairy cows could be found in most farm stalls, especially in those close to the city. It was the sharecroppers and renters of these farms who together joined forces in 1957-58 and in 1969-70 to form the “Consorzio bolognese produttori latte” and “Felsinea latte” cooperatives.

With the goal of receiving recognition for their work and assuring product quality for consumers, these farmers participated in the cooperative movement and struggle for farmers’ rights, founding one of the largest dairy industries in Italy.