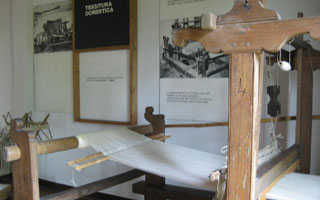 The Bolognese plains were the center of Italian hemp production for centuries, and most of the raw material was exported to other Italian provinces and abroad. What remained was transformed into end-use products in Bologna and in smaller facilities across the countryside using four different techniques. Thousands of people ranging from craftsmen to factory workers worked in the hemp industry.

The first stage of transformation was that of combing, executed by travelling artisans known as gargiolai, or hemp-combers. These artisans worked upon request of the farmer families, passing the raw hemp through various types of combs to produce fibers of different length, thickness, elasticity and appearance. The gargiolai of the townships of Budrio and Pieve di Centro were particularly renowned.

The next phase, home spinning, involved producing thread by stretching and wringing the fiber. The traditional start date for spinning was St. Catherine’s Day, the 25th of November. Women would spend the winter months, often in the stables where it was warmer, spinning the quota of raw fiber and oakum that served the families’ needs. Small quantities were also sold in local markets for the production of sacks and packaging.

For centuries women in the Bolognese countryside spun hemp with a distaff and spindle. Fibers were wrapped around the distaff and held in place with a ribbon. The spinner tucked the distaff into her belt at shoulder height, which left her hands free to pull and wring the fiber. The spinner used one hand to pull the thread from the distaff. With the thumb and finger of her other hand, she spun the spindle, which caused the twisting and wrapping of the thread. The hand-operated spindle and pedal-operated spinning wheel modified the spinning process, but only partially and very gradually. In the Bolognese countryside, the pedal-operated spinning wheel was first used in the 18th century. However, the distaff and spindle remained the most commonly used tools through the end of the First World War.

When the spinning was complete, the thread was transferred with a skein-winder onto large spools for warping and on smaller spools mounted on the shuttle for wefting. From the distaff or spindle the thread was collected in skeins using a reel. Ashes were then used to whiten the thread. Warping was the final process prior to weaving. It involved wrapping the threads around numerous spools, making it possible to form a single series of parallel threads, the warp, which was positioned on the loom according to the pattern of the cloth to be made.

Weaving consisted in crossing the warp with a continuous and perpendicular thread – the weft. The finished cloth was used to make linens or clothing for personal use or to fill the hope chests of the family’s daughters.

Every tenant farmer family owned a loom upon which women spun. Toward the end of the 19th century, 12,000 looms were counted in the Province of Bologna. On the most elementary form of loom, two systems of small knots or heddles separated the warp threads for the passage of the weft. One heddle grouped the even threads and the other grouped the odd threads. The weaver, pressing on the treadles of the loom, raised and lowered the heddles to separate the two series of threads, throwing the shuttle through the shed created when alternating the heddles.