Cultivation and transformation of hemp 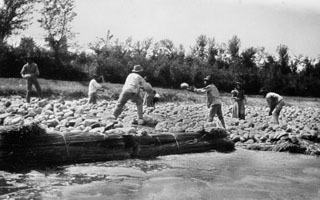 In November, the farmers were required to hoe the hemp fields at their own expense. When the work exceeded the abilities of the family members, they were forced to pay wage laborers to help. Preparing the soil was a particularly grueling tasks, as the hemp fields usually extended across one-tenth to one-quarter of the farm.

Between the 17th and 19th centuries, there was such an increase in the total amount of surface area used for hemp cultivation that it was no longer possible for landowners to force tenant farmers to prepare the soil at their own expense and through backbreaking labor. The only way to augment production was for landowners to underwrite the expense of substituting manual hoeing with plowing. The new production technique combined the work of two tools. First, an ox-drawn plow dug a 30cm trench. A hoe was then used to turn over the soil and deepen the trench. This operation employed 12-16 workers at one time. The new technique greatly improved efficiency by reducing the number of man-days per hectare from 60 to 30.

The plow used to work the land in the 1800s – the traditional “piò” – was asymmetrical and well-suited to Bolognese soil, made primarily of wood with some components made of iron.
The introduction of plowing for hemp production led to improvements in the plow itself. The diameter of one of the two wheels was increased so that it would rest on the base of the trench (ruota da ravaglio, roda d ravai) while the other, smaller wheel would rest on the hard soil. With this adjustment, the tool became known as the “limping plow” and could be used only on even surfaces. Between three and six pair of cattle were required to pull the plow, and since it was rare for a tenant farmer to possess so many animals, they began the practice of “fèr a zérla”, that is, sharing draught animals to be able to plow at the correct depth.

In 1908, Annibale Certani invented a plow that allowed for simultaneous soil turnover and digging at two levels; first with a normal blade (35cm), and then with a smaller additional piece, resulting in an overall 50% savings in production costs.
Until the end of the 19th century, planting was done between late February and mid-March. Farmers sowed seed from a basket (panìr), while other workers used a hoe to cover over the seed and then used a rake to even out the soil. Mechanized sowers were not widely used due to the excessive cost to the tenant farmers, who by contract were required to possess the tools necessary to complete their task.

The date of the harvest was usually set after the third dewfall of August (al trai guaz d agòst), but could be hastened or postponed, sometimes taking place as early as the end of July. Farmers knew the time had come when pollen fell from the male plants in response to gentle shaking. At this point, the farmer would cut the stalks off at their base with a sickle and position them in bundles crisscrossed in an X. Mechanized cutting began around 1930-1935. Once the stalks were dried, they were beaten on the ground to rid them of their leaves and gathered into cone-shaped bundles of 2 meters in diameter (prélla).

After a few days, the cone was positioned on a wooden sawhorse (biancale) and the stems were selected and bundled together by length.
Maceration, or soaking, was used to neutralize the substance that bound the bast fibers (tiglio) to the wood-like stalk (canapulo). The hemp was left to rot in stagnant water that had been prepared for this purpose in the hemp pools.

The hemp pools used in the Bolognese plains were rectangular pits anywhere from 15-20 to 100 meters long, 10-15 meters wide and 2 meters deep. The hemp was fastened onto rafts - postoni - that were then loaded with stones, sunk and left underwater for about eight days. Once the soaking was complete, one of the most tiring and difficult phases began: the bundles were brought to the surface by removing the stakes or stones, hauled to the edge of the pool and untied. After multiple, forceful washings, they were carried by hand and left to drip on the surrounding grass. The hemp was then loaded into carts and transported to the headlands of the canals or to fallow fields, where it was left to dry.
Peasant farmer families also used hemp pools for rinsing woven hemp cloth and washing laundry. They also used them for raising the ducks, carp and tench fish that helped to limit the proliferation of mosquitos, as did the frogs who lived on the edges of the pools. During the warm season, men bathed in the pools and children learned to swim, often using empty pumpkins as floating devices.

Following the First World War, farmers began using log sleighs (ilza) to transport hemp from the pools to the grass, with a notable savings in terms of labor and fatigue.
The final step that the sharecropping contract assigned to the farmer was that of separating hemp fibers from the stalks. This involved first roughly breaking down the stems followed by a second, more refined splintering. These tasks required a large workforce, and tenant farmer families often had to rely on the exchange of labor (fer a zérla) or the employment of wage laborers.


Over the course of the 1800s, farmers in the agricultural areas around Bologna and Ferrara began to make use of a decorticator machine (scavzadòura), first used in 1840 on the property of the Salina Counts in the nearby township of Corticella. As its use became widespread, it greatly reduced the workforce and time involved in hemp cultivation.

At the end of the process, the raw hemp was stored to await sale by the landowner, who was also responsible for selling the quota destined to the tenant famer. As compensation for the debts incurred throughout the year by the tenant farmer, the landowner usually retained the profits from the entire lot.