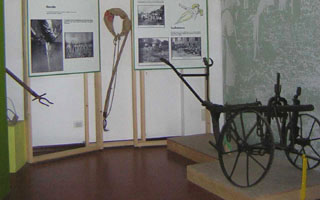 Sugar beet cultivation in the Province of Bologna commenced in 1899, with excellent results for communities whose livelihoods had previously depended on hemp cultivation. The weather and soil were favorable for this type of crop, which was fortunate, as the hemp industry was in crisis and farmers were in search of an alternative. Hemp fields were largely replaced by sugar beets which, in those years, offered increasing prices and better yields. Planted in March and harvested in August, the sugar beet was a perfect renewal crop for Bolognese tenant farms. Although adapting to this crop required minimal modifications to existing equipment, it revolutionized traditional dynamics. Rather than owning seed, the farmer now received it from the sugar production factories. Upon planting, he would sign a delivery contract for his entire yield and receive a monetary advance.

Until 1925, each factory paid for product by weight; later they realized it was advantageous to qualify weight in order to assign higher value to beets richer in sucrose. Beet cultivation brought a wave of modernity to the countryside, as it guaranteed a regular income, an entirely new situation for farmers. This in turn led to a new openness to new practices based more on agricultural science than on tradition and laid the foundation for investments in new machines and equipment, which in turn fostered the development of agricultural cooperatives.