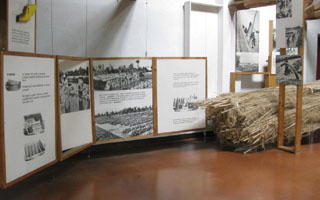 For almost five hundred years, one of the principal centers of Italian hemp production was located in the Bolognese plains. In the second half of the 15th century, hemp cultivation began in the area between the towns of Bologna, Budrio and Cento, and by the first centuries of the modern era it had become the linchpin of the Bolognese agricultural system. Eventually, the area in which hemp was cultivated expanded to include not only the Bolognese plains, but also the agricultural areas around Ferrara, Modena, Rovigo, Ravenna and Cesena. The cultivation of hemp was initially driven by the demand for rope in Venetian shipyards, but hemp was also used by local industries that processed the combed fiber for cords, fishnets, sacks, household linens and clothing.

Starting in the 17th century, Bolognese hemp production found new commercial markets in the shipyards of northwest Europe, where it was used for producing rope and sails. The 19th century saw the final phase of development in the production and international trade of hemp, with significant industrial innovation after 1870. The economic crisis of the 1930s brought the closure of many production facilities, ending market-driven pricing. As the economic boom took hold in the 1950s, agricultural production dropped, trade of hemp all but disappeared and the Bolognese and greater Italian hemp industries underwent a dramatic downsizing.